Our fifth guinea pig is none other than TravisCI, you’ll find the other articles by clicking here: #1-Jenkins, #2-Concourse, #3-GitLab, #4-CircleCI.

TravisCI is a free software for continuous integration. It provides an online service used to compile, test and deploy the source code of the software developed, particularly in connection with the GitHub source code hosting service. A command-line is available to interact with the online service: https://github.com/travis-ci/travis.rb.

In this article, we present the configuration part of a pipeline. The pipeline function of TravisCI works as a descriptor in YAML format. The configuration is stored in the project in a .travis.yml file.

TravisCI integrates very easily with a GitHub project. However, it cannot be used with a private repository because the tool is available in SaaS mode. The GitHub project is configured in the project, the pipeline is triggered when a source code is changed on a branch, whether it is a change in the content of the source or the pipeline itself.

A TravisCI pipeline follows a cycle of per-established tasks to follow clear steps and keep a bill of materials in each pipeline. The basic cycles are: before_install, install, before_script, script, after_success or after_failure, after_script (see job-lifecycle).

It is possible to have several distinct steps in the pipeline by defining jobs, each job must define the sequence of cycles. As in other tools, it is possible to keep the workspace from one cycle to another by passing options like “skip_cleanup: true”, for example.

The amount of language and deployment platform is impressive and makes this tool very versatile!

The configuration of a TravisCI project is very fast, if your source code is in GitHub. Firstly, log in with your GitHub account. 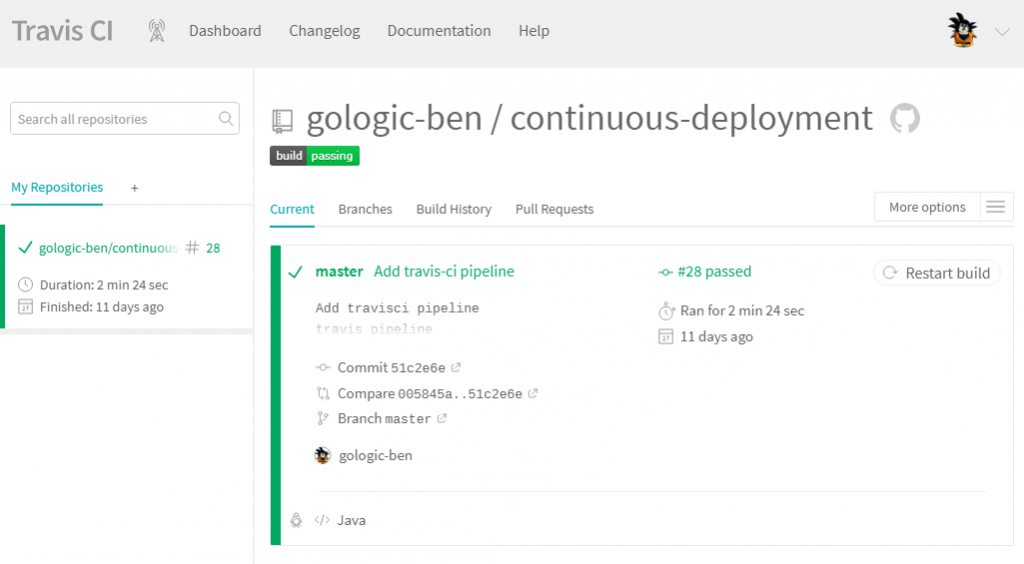 Select the project in TravisCI. If your project already has a .travis.yml file, then the pipeline will run immediately and offer a pipeline summary.

In order to deploy the application in AWS, it is necessary to add the configurations to AWS in the project environment variables. In the “More Options” tab, click on the “settings” icon of the project.

In the “Environment Variables” section, add the AWS_ACCESS_KEY_ID and AWS_SECRET_ACCESS_KEY keys with your AWS configurations. 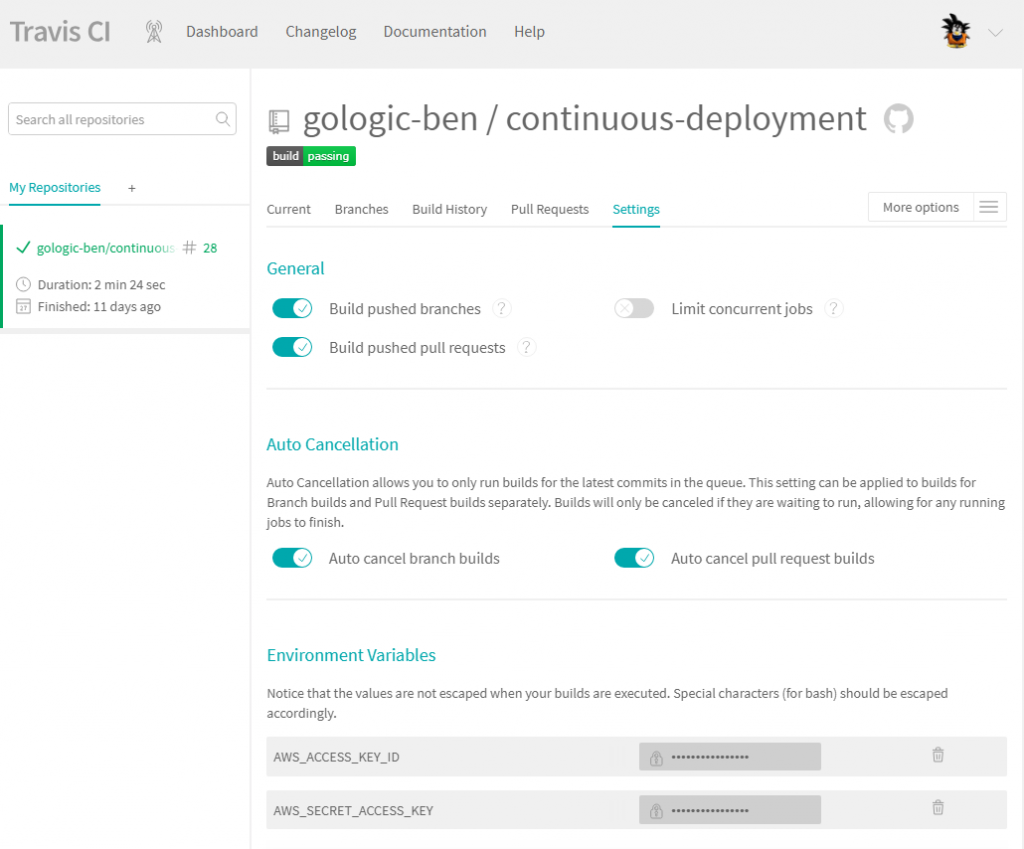 Now that the project is set up, let’s go to the pipeline creation stage!

Pipeline as code : let’s get started

In the example below, the pipeline has two steps to test “stages” but it is possible to have a very simple pipeline quickly.

In the project sources, open the .travis.yml script and study the content:

As soon as the .travis.yml file is added to the project, the “Build History” tab detects the change in GitHub and provides a summary of the current builds and status. The “Current” view displays the current build and logs to see the progress of the pipeline steps.

TravisCI is hosted in SAAS mode for easier maintenance and integration with GitHub.

The amount of templates per programming languages and deployment platforms is impressive.

Very well integrated with GitHub, it becomes almost the default tools when the project is hosted in GitHub.

The interactive mode with the command-line is convenient for debugging an online service.

Pipelines with the basic “build, deploy” steps are simple but pipelines involving more complex steps like test runs can be very complex to set up.

TravisCI offers a version “On Premise” but it is reserved for companies, so impossible to demonstrate.