This series of articles explores various tools for executing pipeline-as-code and deployment.

The goal for each article remains the same: check out GIT source code, compile a JAVA project with Maven, run the tests then deploy the application on AWS BeanStalk.

Those steps will be written as code in a pipeline and executed with a CI/CD tool.

With low-risk releases, you can quickly adapt to business requirements and user needs. This allows for greater collaboration between ops and delivery, fueling real change within your organization, and turning your release process into a business advantage.

Pipelines as code defines the deployment pipeline through code instead of configuring a running CI/CD tool.

Concourse is a pipeline-based CI system written in Go. It is a very lightweight CI/CD engine that functions with a WEB UI and workers.
The specificity of Concourse lies in the fact that all jobs are completely isolated and must respond to 3 events: get, task and put.

Pipeline is based on resources and jobs:

Jobs can be triggered from a GET step, for example by commit in a version control system, by a new version of an application in a S3 Bucket or Artifactory or any resource available.

Start Concourse with Docker (docker-compose) with the following instructions: http://concourse.ci/docker-repository.html

Check whether Concourse runs at localhost:8080 and login with docker-compose credentials (concourse:changeme) 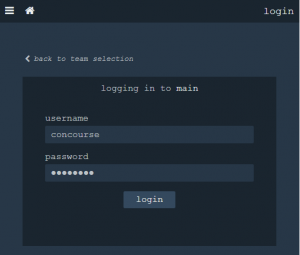 L’The fly tool is a command line interface to Concourse. It is used for a number of tasks from connecting to a shell in one of your build’s containers to uploading new pipeline configuration into a running Concourse. Install binary at Concourse Download section.

Login to Concourse with Fly

First, Fly needs to set a target to access team on Concourse. So, to connect to Concourse with Fly:

Concourse is running, Fly is connected to it. Ready to rock!

Concourse is a declarative-style pipeline rather than a scripted-style pipeline. Documentation is quite clear as long as the Concourse concept of resources and jobs are understood.

In project, open concourse.yml and let’s take a look!

This pipeline is an inline pipeline for the demo purpose but tasks in pipeline can be separated into files.

To execute a Pipeline job in command line instead of web-ui, run Fly command: 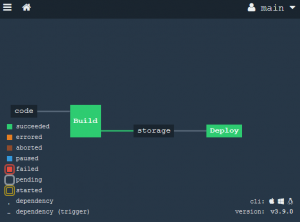 The pipeline (concourse.yml) is in the application, it evolves at the same time as the application and is now under version control. Each code change will trigger a new pipeline job and redeploy to AWS, switch, and deploy!

Concourse is an extremely lightweight tool that requires a minimal infrastructure.

Concourse requires very little click to see the pipeline results. Fly command is quite useful to interact with Concourse.

Concourse focuses only on pipelines. It’s a stand-alone tool and it can needs a lot of external resources to run a pipeline. For a CI/CD orchestrator it can be useful to have built-in functions such as credentials or storage.

Changes in pipeline (concourse.yml) are not triggered from a commit or change. Every change must be updated with the Fly-cli using the set-pipeline command, which can lead to unversioned pipeline changes.

Concourse has no fine-grain authorization.

Concourse debugging can be difficult.