This series of articles explores various tools for executing pipeline as code and deployment.

The goal for each article remains the same: check out GIT source code, compile a JAVA project with Maven, run the tests and then deploy the application on AWS BeanStalk.

These steps will be written as code in a pipeline and executed with a CI/CD tool.

What does “continuous deployment” mean?

With low-risk releases, you can quickly adapt to business requirements and user needs. This allows for greater collaboration between ops and delivery, fuelling real change within your organization and turning your release process into a business advantage.

What does “pipeline as code” mean?

Pipeline as code defines the deployment pipeline through code instead of configuring a running CI/CD tool.

GitLab is the next target for our third article. You’ll find the first, second article by clicking here: #1-Jenkins, #2-Concourse.

This article will present the pipeline section. The GitLab pipeline function works as a YAML description. The configuration is stored in the project.

Tasks are mainly script executions and invoke Dockers to execute the operations. Several elements are available in tasks to be realized. Documentation is available at this location.

Start GitLab with Docker by following the official instructions: https://docs.gitlab.com/omnibus/docker/README.html 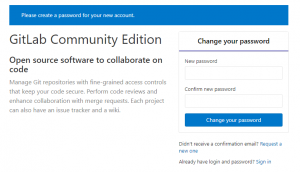 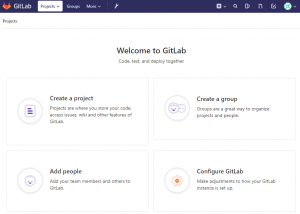 The prerequisite for using the GitLab pipeline is to create a project. A project can easily be created by following the instructions on the GitLab home page, as shown in the overview below. 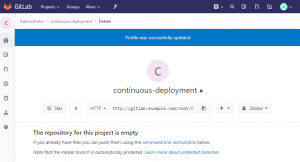 Once your project has been created, you must add the source code by following the GIT instructions on the project page.

A GitLab Runner allows you to perform pipeline tasks. At least one Runner is required in addition to installing GitLab. A Runner is easy to execute as indicated in the installation and registration documentation.

Once the Runner is available, it is possible to run an application’s pipeline!

In the project sources, open the .gitlab.yml script and check the content:

As soon as the .gitlab.yml file is added to the project, the pipeline view becomes available via the menu, or by adding /pipelines after the project address.

Details of a pipeline 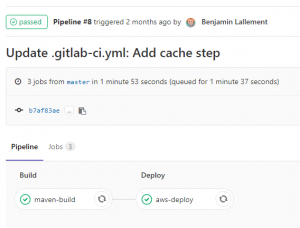 The pipeline (.gitlab.yml) is defined. With each code change, the steps and stages are triggered to compile, store in the pipeline’s working folder, and deploy to AWS.

GitLab offers complete and intuitive integration for all features.

GitLab does not offer a CLI to test pipeline execution. One must “commit” the pipeline to see it running, which can lead to much trial and error.

Substantial learning time is required to master the declarative pipeline YAML syntax and use it without error.